April 05, 2020
Are you easily distracted at the moment, does your mind wander and whirl...that is me, which is why I've chosen to make a blanket... a longer term project, something I can pick up and put down when I want, something to keep my mind and hands occupied but simple enough for me to be able make whilst watching tv in the evening.
I've used these spirals in a few designs and I think they're fun to crochet. I've chosen to use the Scheepjes Stonewashed and Riverwashed colour pack for my blanket as I like the variety of colours, each small ball is a treat, perfect for a swirly pattern which reminds you of sweets and lollipops.
There are 58 balls in the pack and I thought if I leave out two, the one I've chosen for the main colour (Moon Stone) and the next closest, I should be able to make a blanket of 7 x 8 squares (if I've done my times tables correctly ;)).
The full blanket pattern is now in my Etsy Shop but I thought I'd share the pattern for the motif with you here. Hope you like it :) 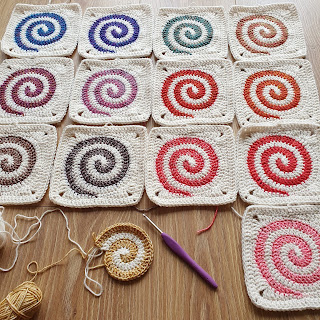 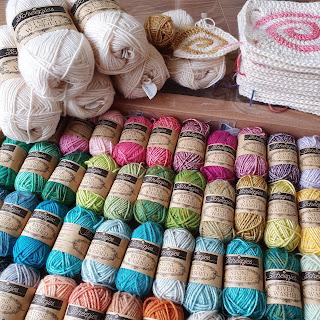 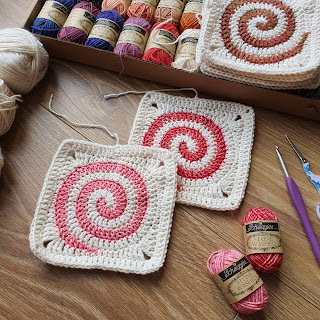 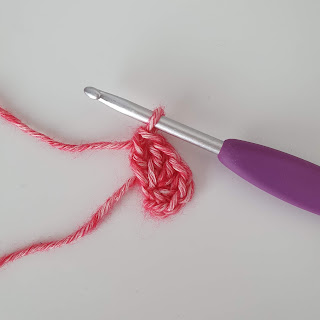 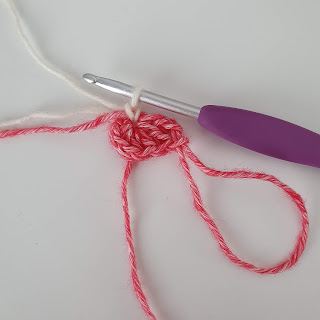 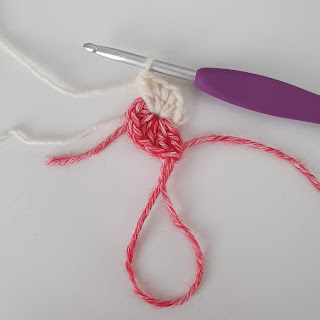 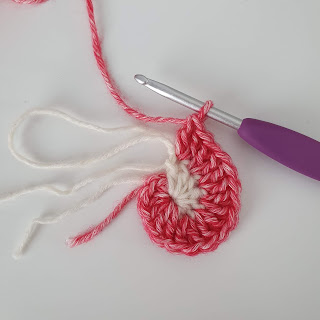 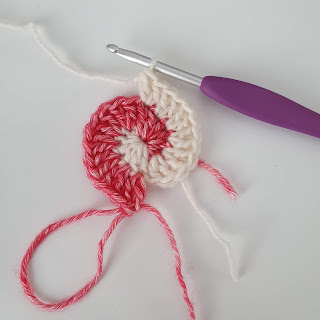 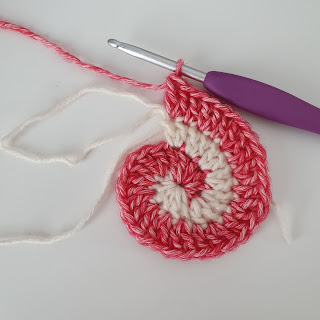 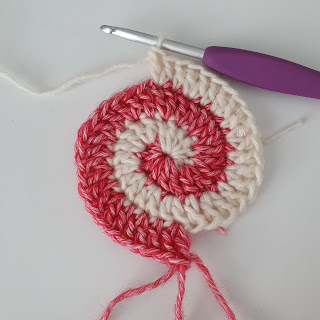 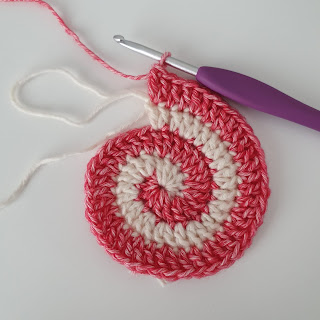 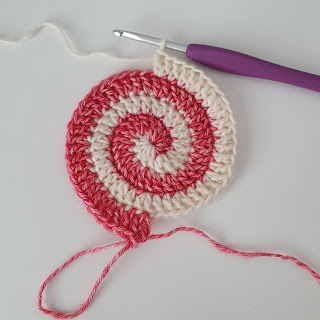 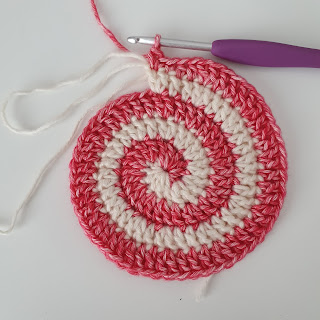 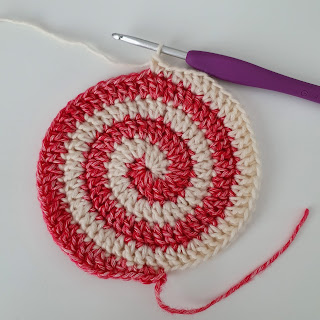 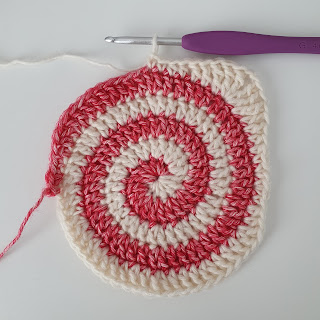 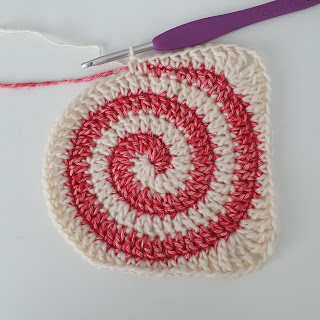 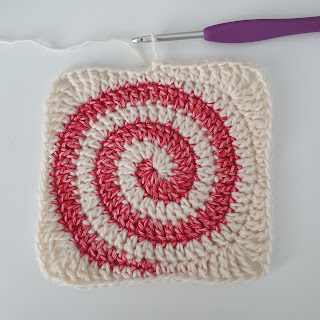 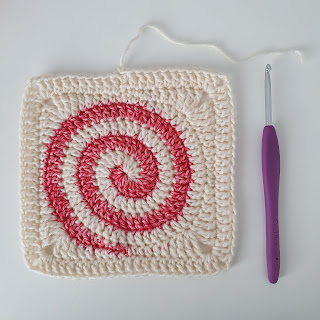 There you have it. I'd love to see your squares and blankets if you make any, send me a photo or tag me on Instagram @flo_and_dot  #floanddot
Thanks Sarah-Jane :) 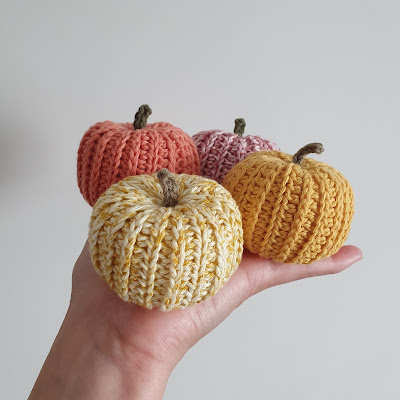 Inside outside mini htr pumpkin

Autumn normally makes me feel a bit down but as I've been feeling like that all year I'm hoping this year it's going to work in reverse! (: So starting with a more positive vibe I’m sharing my mini htr pumpkin recipe...and just because I'm feeling a bit back to front you can make it in two ways inside / outside whatever way you consider to be the right side :) Ingredients: Ricorumi DK cotton 25g balls in autumn colours available from  Lovecrafts  (I used a couple of their Spray colours too) 3.5mm hook Stuffing Method: (UK terms htr = US hdc) Pumpkin, make 18ch Row 1: htr in third ch from hook, htr to end, turn. (16htr) Row 2: 2ch (does not count as st throughout), htr in the very front loop the one under the top two loops (see pic below) to end, turn. Row 3: 2ch, htr in back loops to end, turn. Rows 4 to 20: Rep rows 2 and 3 till 20 rows. Fasten off leaving a long thread. Join short ends together with through base of ch from Row 1 and back loops of Row 20, turn so rib i 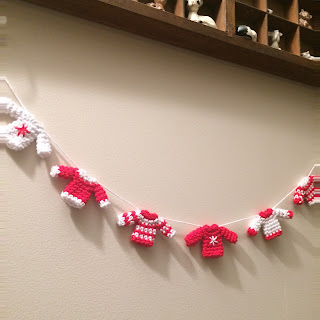 Hi there, a week has passed and I haven't progressed very far with my Christmas shopping and we still haven't put the Christmas decorations up.....so what have I been doing with my time?! Well I've written my cards, which is a start and I've also been faffing with tiny crochet Christmas jumpers! The inspiration for these came from some Christmas jumper wrapping paper left over from last year....I'd run out of matching tags so thought I'd make my own crochet jumpers to decorate the presents. I made a few in different designs and then thought I know why not string them together to make a garland and that's what I did. Here is the pattern.... Tiny Christmas Jumper Garland You will need: 3.5mm or 4mm crochet hook 1 small ball DK red cotton yarn 1small ball DK white cotton yarn (I used Paintbox DK cotton from Lovecrochet ) Finished size: Approximately 4cm tall by 6cm wide Abbreviations: (UK terms) ch - chain st(s) – stitch(es) dc - do